Introduction- William Shakespeare, starts his play, As You Like It with this verbiage,   “All the world’s a stage, And all the men and women merely players; They have their exits and their entrances, And one man in his time plays many parts…”

It is true. We all do play different roles in life and the practice of Freemasonry influences how a Mason acts out his roles in life. Here are seven short essays to consider how a mason may act out his parts on life’s stage, guided by the teachings and values he discovers within a Lodge of Brothers. I must give credit for much of this content to the many of you Brothers who have provided this input in sessions I have conducted in lodges and districts over the past five years.

Years ago, my Father was moving to Australia for his job. He was flying across the Pacific and wearing his masonic ring. An Australian Brother Mason was sitting next to him on the flight and they were talking about a number of subjects when the Australian Brother said, “Ed, do me a favor. While you are in Australia, don’t wear that ring. Let us come to know you are a Mason by your actions, rather than your jewelry.”

A Mason as a Husband

In the character of a Mason, we understand vows and taking on serious obligations. In Lodge we have all knelt at the Altar of Freemasonry and taken on ourselves binding obligations pertaining to each degree. We keep those obligations and live our lives consistent with them. Understanding this, we expect that a Mason’s conduct in the institution of matrimony will match that of his conduct within Masonry. Thus when a Mason’s vows are freely given they become a matter of personal fidelity whether given in a Lodge, Church, or before a Justice of the Peace. The Mason’s wife should rest easy in the knowledge that, beyond the passion, she has joined with a man of character and values. His lodge teachings encourage harmony and brotherly love. These logically extend into the practice of building solid lasting bonds that will stand the test of time and endure the inevitable pain that falls into each life. He has made a commitment before his brothers and God to honesty and upright conduct. Wisdom comes with age and proper instruction. As speculative Masons, we are given proper instruction by association with good men and lessons designed and conceived to make us each a better man. The Mason’s bride should be encouraged that his trips to the Lodge and study of Masonic teachings are out of the real desire to be a better man and husband. The Mason is, by definition, a man committed to the continuous improvement of himself and his world. All Masons have committed to help and assist the Masonic Widow. The Mason’s wife may also be assured that when that time comes, she will not be just left alone to grieve. Rather, she will feel the warmth of the Brotherly Love extended to her as an Honored Lady and part of our Masonic Family.

A Mason as a Father

We all start as Masons hoodwinked, kneeling and being asked in whom we put our trust. Every Father knows how many times a child will cause him to be on bended knee. Every Masonic Father puts his trust over and over again in those same Divine Hands. During the first stage of a Mason’s progress, as an Entered Apprentice, he is, in part, tasked to learn and improve himself. The Mason has an understanding of how important in youth this charter is. Once he becomes a Master Mason, his charge is to help lead and mentor younger Masons. Those skills better enable him as a Father to mentor and guide his children. The masonic attributes of patience, uses of repetition, and the importance of holding oneself and others responsible for their progress and actions all enhance his abilities as a Father. Although at certain ages his children may view him as rigid and unyielding, he must have faith that his fortitude will ultimately be understood. Certainly, circumscription, respect for others and the ability to establish and accomplish goals are best passed on by example. Every active Mason refines in himself a sense of history and many bridge generations by learning to improve through the lessons contained in family stories, parables, legends and allegories. This skill is often passed to children who may go on and develop an interest in, and even familiarity with, their ancestors. The Masonic dad also brings with him the attentive ear, bending to hear what his children are really saying. The Masonic Father is one who values proper behavior. He believes character determines the destiny of a man. A Mason knows that immortality is within his grasp, but understands that he must first lay down his working tools. So death is not a threat, but a simple fact of life. He passes this on to his offspring. Thus, a mason’s children are taught kindness, respect, and, by example, the proper deportment expected of a man. A Mason who is the Father of a son may even someday hope to raise his son in Masonry to his own role as “Brother.”

A Mason as a Grandfather

As we age and our joints start to object to more than just exercise, if blessed, we may find ourselves in the role of the Grandfather. Yet a new opportunity to help guide and influence loved ones into more enlightened lives well beyond our own mortality. An occasion to model the behaviors involving deep thought, study, the joy of learning, personal integrity, individualism, dignity, strength, courage, charity, and humor. It is a time to create cherished memories that pass on these values to the seed of your seed. It is a chance to excite young imaginations to greatness. This is when a Masonic Grandpa can love, share and be there to serve as a source of wisdom for future recollection.

A Mason as a Citizen

Just as every Lodge’s Stated Communications are opened with prayer, they are also opened with the Pledge to the Nation’s Flag. As Masons we take pride in our obligations to serve their God, fellowman and Country. Allegiance to the Nation and a patriotic spirit are dominating themes within every Lodge. From history we know the Masonic teachings were the original source for considering independent freedom of religion, speech, thought, and rule by the people rather than a sovereign. Although Masons are forbidden from discussing politics in a Lodge to encourage harmony, we have always been deeply committed to the establishment of better governance. Many Masons have contributed to Freedom’s narrative. Consider the contributions to free government made by the fourteen Masons who have served as American Presidents, by the twenty seven Masonic signers of the US Constitution, and the seven signers of the Declaration of Independence, Simon Bolivar, Giuseppe Garibaldi, Jose Rizal, and Benito Juarez to name a few. Consider how Masons have served mankind as citizens founding the Red Cross, 4H, The Boy Scouts, AFL, NAACP, Elks, Lions and National Parks. Masonic citizens have always served the greater good from local School Boards to the great battles for freedom.   Masons are always at the forefront. Consider our service whether we are dedicating a cornerstone for a local building or helping with a local blood bank. In State Capitol Buildings and local volunteer organizations from governors to bell ringers at Christmas, just look and you will find another Mason. Service to man motivates the Masonic citizen. We all stand for brotherly love, relief and truth.

A Mason as an Employee

Perhaps the most prominent underlying lesson in Masonry is the lost attribute of taking responsibility. As Masons we are responsible for keeping what is private in a Lodge, private. We are responsible for keeping our promises. Masons are responsible to help watch out for brother Masons and give them good counsel when needed. We are responsible to watch out for and help the widows and orphans of other Masons. We support the Grand Lodge and the Masonic Code and Laws that manage our jurisdiction. Local Lodge officers and Grand Lodge Officers are responsible to serve those Brothers who elect them. So what is the biggest attribute in any workplace? It is taking responsibility for the work performed. The employee that makes it personal that the quality of product or work performed exceeds standards is second nature to a Mason. He is comfortable with the quest for excellence with such specific standards in ritual work which he must memorize and practice on a regular basis. The Masonic employee knows how to learn new skills and procedures. He has developed this skill set at Schools of Instruction and by his own progress as a Mason. Those who have taken on leadership roles in a Lodge also bring leadership, budgeting and communication skills to the workplace refined by this experience. Public speaking skills are practiced and often taught in Lodges and further increase an employee’s worth to his employer. Leadership training is now available through the new Masonic College to add weight to the Brother’s resume. Finally, the Mason keeps the Holy writings to guide his actions as his trestle board. Ethical behavior in the workplace equates to more reliable dealings and fewer problems with discrimination, dishonesty, and abuse of power. Bottom line is, hire a Mason.

A Mason as a Scholar

Masonic education is a passion to a large number of Masons. To understand the references in the Masonic ritual and evolution of this gentle Craft requires study of the Holy Writings and world history. One could dedicate himself just to the study of Scotland, France, England and the Jacobites and be drawn into years of study in early Masonic history.   The study of regimental lodges in the English military could keep a historian busy. The impact of Freemasonry on America’s Revolutionary and Civil War periods fills volumes and could still stand further research. Hitler’s war on Freemasons and the Jews are well documented for even the casual historical reader. The Masonic scholar does not fall into the traps of the History Channel or getting his information from novelists. He studies history, he reads, he thinks and he learns and shares with his Brothers.

A Mason as a Brother

Brother Robert Burns a Scottish poet described Masonry as the Mystic Tie it is also known as the Masonic Tie and the Tie that Binds. We are symbolically bound together in common vows, values and beliefs. It never ceases to amaze especially new masons how another Brother they have never seen will strike up a conversation and welcome them to the area. Many a Mason has visited a lodge in a town with which he has no connection and found 15-20 new friends.   In masonry this is never contrived or forced. It comes from a genuine happiness that springs from the common well of knowledge and shared values. Every one of us know we are a part of something bigger than ourselves. Any one of us can go to a Lodge of Brothers and know that others will help and do all they can for us in that community. That Lodge is a special place like a Church, library, museum, or a school. The lodge makes us more than we could be without it… because our Brothers come together there.

‘And Crown thy Good 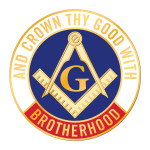 PrevPreviousSomething to Ponder
NextThe Solution and the ChallengeNext