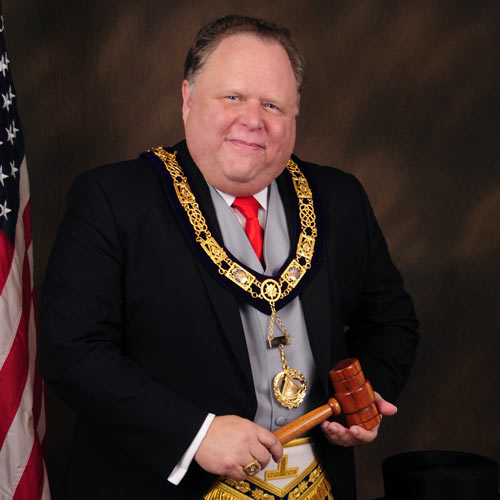 I’m sitting here as I watch the Packers win yet again, writing this column and reflecting on how good I feel about Masonry in Wisconsin. As the host Grand Master, I was asked to speak for the Grand Masters attending the Scottish Rite’s Supreme Session here in Milwaukee at the end of August. Part of my welcome was saying that Milwaukee and Wisconsin have it all, which I called the 4 B’s: the first three being Beer, Brats and Bowling, the ones that made Milwaukee famous, and the fourth being Brotherhood, which makes Milwaukee and Wisconsin a hotbed of Freemasonry.

As I have visited lodges, I’ve told the story about the Forget-me-not being the focal point of the Grand Master pin design this year, emphasizing that lodges need to get their Past Masters and other Brothers with many years under their belt re-engaged, sharing experiences and memories. Engage with the learned Brothers of other lodges as well. This is a great way to bring back events and activities from our past but change them as needed to match the needs of today, engaging new Masons, allowing us to “embrace the experience”.  What I’m finding is that lodges are putting this concept into action, and although some of you may be doing this in reaction to my words, I really think you’ve all come to the same conclusion yourselves.

Trying new things, old things, improving old classic events, modifying someone else’s, I’m seeing it all.  I’ll leave out lodge names of some of these events I attended, but great things are going on in Wisconsin! Imagine going to a lodge picnic that has a street block barricaded, has three different bands with different types of music to please all, great catered food, Culver’s frozen custard, and a roving magician. It was amazing, and a great time for all that attended. Another lodge, instead of the standard family dinner, turned it into a humorous evening with a Knife and Fork degree.  I attended an MM degree, conferred by a father on his son, making him his Brother, but a new angle was added, making the degree even more memorable and emotional. What made it unique was that that 11 other Past Masters, including myself, who had watched his son grow up in DeMolay, each did one of the ties in the obligation at the altar. It was quite an experience. At another event, the WM added a guessing game to their Past Master and Awards dinner by having cards, reciting public or world events that occurred during each Past Master’s year in the East, and having the Past Master recognize it and claim it. It was really fun. Just try to make your events unique, fun, and memorable for all that attend. Resist the temptation to cancel events when there are fewer attending than the past. When successful, others will regret not attending and will note to themselves to make sure to sign up for future events.

I was honored in August when the Master of my plural lodge, Lafayette No. 265, asked me to re-obligate the lodge in the MM degree at the September meeting. I hadn’t done an MM degree in a while, so I had to study the obligation again, but it is amazing how quickly it comes back when needed. I would suggest that all lodges do this periodically, it reminds us of our ties, our promises, in the obligation, but it is more profound and memorable when all are reciting it on command, than just hearing it on the sidelines along the altar during a degree. We did it in the same configuration as Annual Communications, the Master kneeling at the altar, and the rest of the lodge in a triangular formation behind him, with hand to shoulder.

I mentioned during my Saturday morning talk at Annual Communication that we would get the new alternate candidate interview process up on the Grand Lodge website. It’s there now and gives the lodges another way that may help give you a better feeling of confidence that you’ve done your best to guard the West gate in your lodge. The process document gives you the background on the new approach to the interview process as well as a new interview form. The goal is to not mimic questions on the petition, but to better understand the character of the man that is petitioning to join your lodge, asking him why he is joining, what he expects to get from joining, and what he is able to offer the lodge as well. Take a look, I think you’ll like it.

I recently defended our Wisconsin Badgers in a Facebook wager with the Grand Master of Michigan, MWBro. Mark Manning, a good friend of mine, an acquaintance made and strengthened when attending national and state level Masonic conferences and annual communications. On the morning of the big Wisconsin-Michigan game, he challenged me to a wager that if Michigan won, I would have to post on Facebook a picture of myself wearing a Michigan “Go Blue” cap, and if Wisconsin won, he would have to post one of himself wearing a Badger cap. Our Badgers prevailed and dominated them, so he mentioned now that his cap is on order for posting the picture. He also challenged me again for the upcoming MSU game.  I told him he is going to get good use of his Wisconsin cap this year! Although I am an Ohio State alumnus, I have lived here in Wisconsin for over 25 years and want to see our Badgers win (maybe not when they play OSU).

Our Masonic Days of Light for this fall are coming very soon, in Tomah on October 19 and in Sheboygan on November 2. Are your lodges prepared and signing up candidates and mentors?  Remember the dates for the Spring will be on March 7th at Racine/Belle City, and on March 21 in Eau Claire.

A quick update on the Madison Masonic Center, we’re in the process of finalizing the new board of directors. We want to make sure we have a good rounded board, with a variety of backgrounds to help it achieve its goals. That brings up another subject around this transfer of foundation/charity to our governing board, we voted on an assessment of $10 per Mason, including PMPs, after control transfer of the Foundation. That will be assessed outside of the dues process by Grand Lodge to all members, due January 1, 2020.

Hope to see you at one of my upcoming visits. I’m proud to be a Freemason! I hope you are too.